VCR Repair and other terrible careers Sally Struthers peddled in the 90s.

It’s amazing the nostalgia that random Twitter conversations about Beverly Hills: 90210 has-beens can trigger. Learning that Brenda–or “Bren,” as my homeboy Dylan used to always call her–is hawking online university degrees now immediately made me think of all those old “Earn your degree at home!” commercials from the early 90’s. Yes, sometimes I even get nostalgic for old, shitty commercials, like this one for International Correspondence Schools that starred Sally Struthers:

There were probably a dozen or so different variations of this same commercial, each new version starring an ever more irrelevant and desperate-looking Sally Struthers urging you to train at home to make more money. It’s a strange parallel because I’m fairly certain these very commercials aired during episodes of 90210. Did Shannon Doherty know back then she’d end up following the same path? I guess we’ll never know!

As for me, I always found these ICS commercials to be strangely comforting. Like somewhere in the back of my mind I knew I could become a total failure at life and still call that 1-800 number someday and be on my way to an exciting new career. While wearing sweatpants! 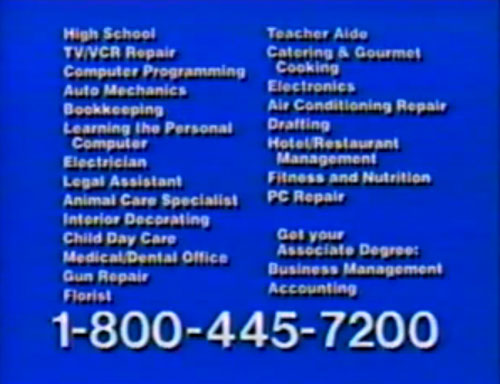 Just for shiggles, I tried calling that 1-800 number a few minutes ago just to see if it still worked. It rang about thirty times, and I was then greeted with a recorded female voice saying, “Your party is not answering. Please try again later. We’re sorry, but your call will now be disconnected.”

I can only assume this means that International Correspondence Schools is STILL SO BUSY SELLING FAKE DEGREES they didn’t have time to take my call.