As I woke up this morning, dreading the fact that I was turning 40, I started off the day ignoring the influx of Happy Birthday texts and trying to keep a low profile. Then I went downstairs and saw the pile of gifts against a backdrop of TMNT party decorations that my amazing husband surprised me with before he left for work this morning and my mood started to improve considerably.

Seeing the vintage TMNT decorations struck me pretty hard in the feels, and I was instantly reminded of a birthday many years ago… 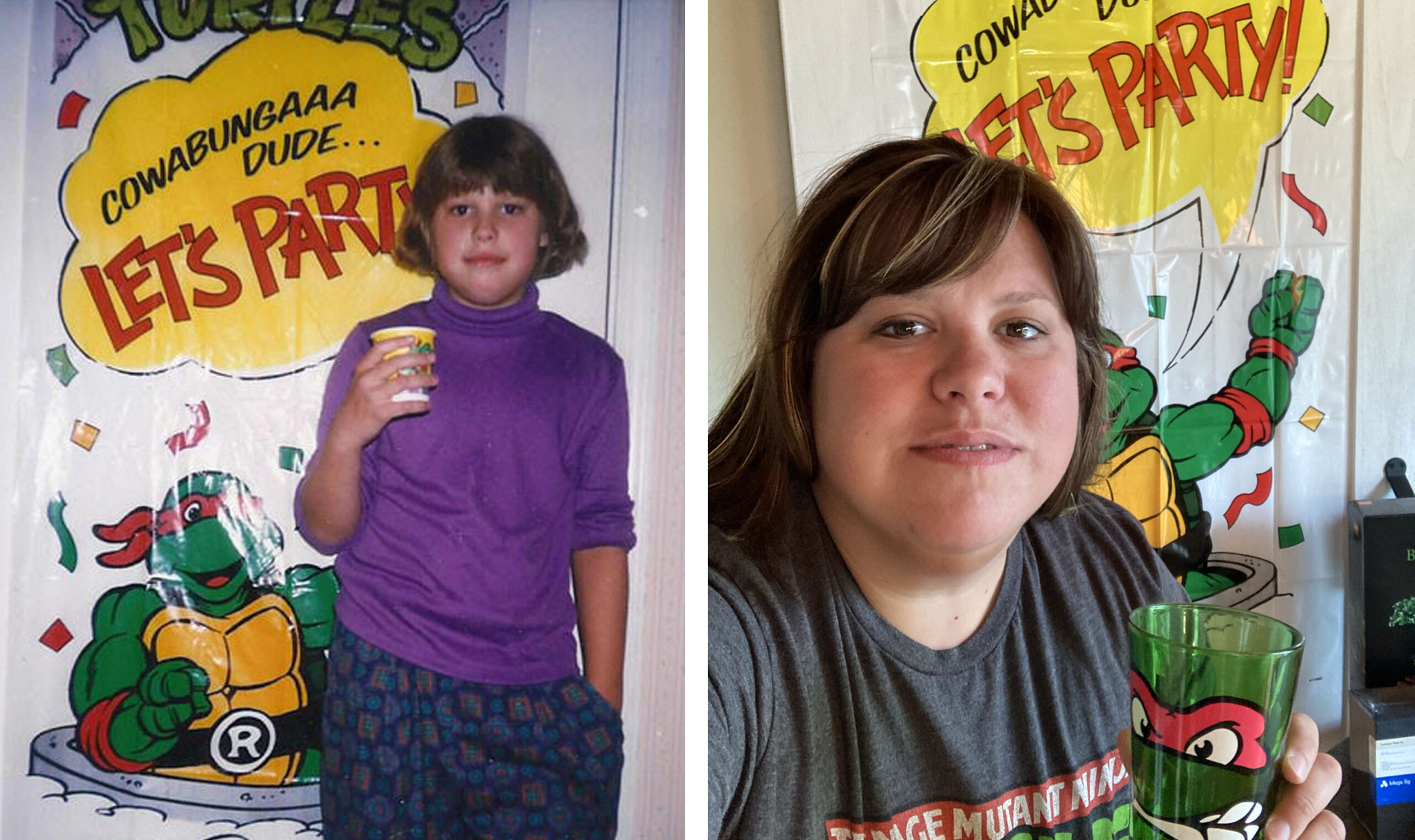 As you can see, my love for Teenage Mutant Ninja Turtles is still going strong. (Also, I’d like to think I have better hair now.)

At age 40, I can confidently say I’m living my best life. On top of a successful career that I love doing, I have a wonderful husband, two beautiful children, a supportive family, good friends both old and new, and so many things to look forward to. It sounds stupid, but when I saw the “Cowabunga Dudes!” banner hanging up, I was struck by how much of a constant the Turtles have been in my life — through ups, through downs, and sometimes even when I didn’t know I still needed them. Did I mention a mutual appreciation for TMNT was how I even met my husband to begin with? Or that one of my proudest moments as a mom (so far) was when my 3-year old daughter insisted we watch Ninja Turtles together for what would be the first of hundreds of times? For these reasons and many others, it’s something I keep coming back to.

Reflecting on a Lifetime of TMNT Fandom

I consider myself lucky to be a part of the TMNT fandom since it started, having seen how it’s changed and evolved over the past 30 years. (Check out this infographic I created a while back to celebrate what was TMNT’s 25 year anniversary at the time). One of the things that amaze me about this fandom is how it seems to find new life and new audiences every couple of years. Something that’s always appealed to me about TMNT is this idea that they’re outcasts in a world that doesn’t understand them. Despite every challenge imaginable, they’ve trained themselves to become not only powerful enough to defend themselves, but heroes who go out of their way to help others. At its core, TMNT is really about the family you choose and the choices you make, and I suppose that’s something that is timeless and appealing to every generation.

Throughout my lifetime there have been movies, TV shows, specials, comics, video games, albums, live-action performances — every form of media imaginable — and of course, the toys. Too many for the average collector to even keep up with, but that doesn’t stop me from spending outrageous amounts of money on those little green pieces of plastic.

Of course, not all of the TMNT iterations have been good. Some are just downright awful (I’ll let you try to figure out which ones I mean) and many Turtles fans like to pretend they don’t exist. But that’s a lot like life, isn’t it? We celebrate the good parts and repress the bad, as if they were embarrassing photos of ourselves, not unlike the one I shared at the top of this post.

And then there’s all the new TMNT stuff, both current and upcoming: new movies in development, new toys, new IDW comics, the amazing micro series that is The Last Ronin, and the upcoming retro game Shredder’s Revenge (if it would actually get a release date, FFS). Even as creators Eastman and Laird take their final bows, I can’t help but look ahead and feel excited for all of the things to come. As is the case with so many other fandoms, the best stuff often happens in the hands of other creators. I can’t even imagine what the TMNT would be like without the talents of Tom Waltz, Fred Wolf, Jim Henson, Cirio Nieli, and the many others who’ve given shape to some of my most favorite incarnations. Just as I look forward to what’s next with TMNT, I look forward to what’s next in my own life, and who will play a role in influencing it. And I’m sure the Turtles will be right there with me through it all, just as they’ve always been.

Sometimes all it takes is a silly thing like party decorations to remind us not to take this getting older crap so seriously. The older I get, the more I’m amazed how certain things tend to stick with you, some of them for your entire life. Will I still be a TMNT fan after 30 more years? Something tells me I already know the answer.