Michael Jackson and E.T. are two of the biggest pop culture icons of the 1980s, so it makes sense that this exists: 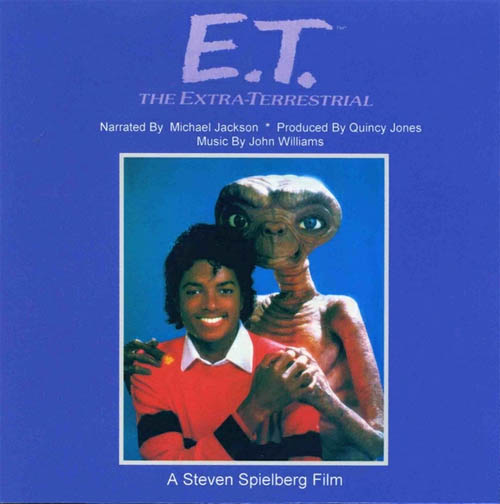 Little-known fact: the above photo was shot in Michael Jackson’s bedroom.

But somehow I made it through childhood without ever having known about it, which is a shame because I loved Michael Jackson, E.T and those Read-Along Adventure books, which I was just talking about the other day. This would have probably made my head explode.

Listening to the album as an adult, however, I’m bewildered as to how this thing won a Grammy award for Best Recording for Children in 1984, especially when it was up against the likes of a Sesame Street album and Rocky Mountain Holiday by John Denver & The Muppets, two things that are still relevant to kids today. I think they just gave awards to Michael Jackson for being Michael Jackson.

If you’ve never listened to this album before, it’s as weird and uncomfortable as you would expect a children’s album narrated by Michael Jackson to be. Though it includes voices from the original cast and much of John William’s fantastic score (one of my all-time favorites by him), you’ll have a hard time maintaining a straight face through it.

Some person with awesomely bad taste (my immediate suspicion was Corey Feldman) was cool enough to upload the whole thing to YouTube:

If you’re a horrible human being like myself, you’ll be tempted to make all kinds of terrible jokes when you hear him say “he put the little round object in his mouth”