In a world where only one out of four Golden Girls is still alive (in before Betty White passes away), I was delighted– nay overjoyed–to unwrap my favorite sassy seniors in 8″ action figure form.

JUST LOOK AT THEM! 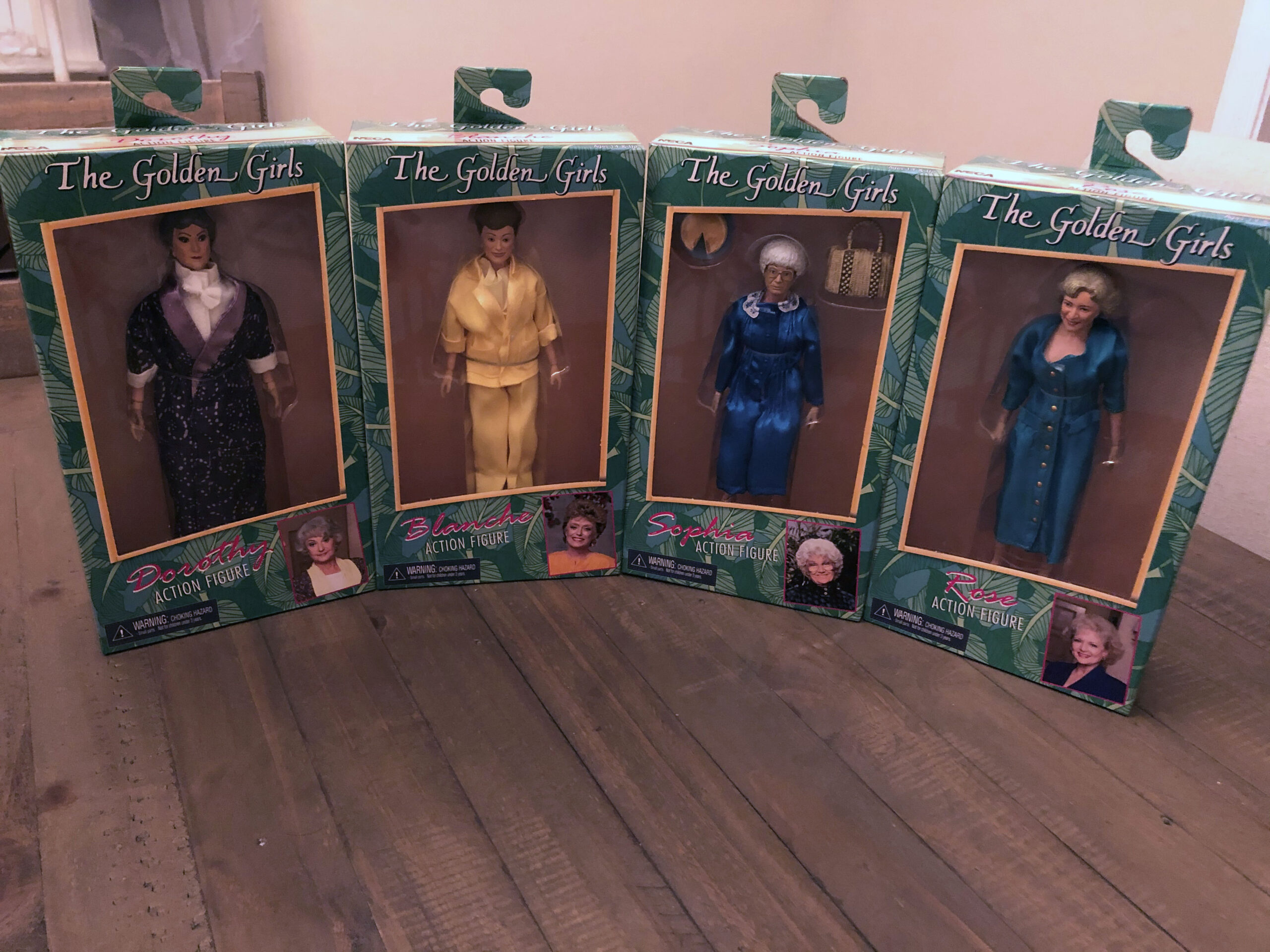 Retailing anywhere from $30 – $40 per Golden Girl, owning a complete set is not exactly cheap. Maybe some people just have more restraints when it comes to collecting toys. I am not one of those people.

But I don’t know how you could NOT own a complete set. The Golden Girls are a package deal. What is Dorothy without sweet Rose’s idiocy to make her feel superior? What is Blanche without Sofia’s savage whore-shaming?

The girls come packaged in pastel box art graced by gentle pond fronds, conjuring images of lush Florida scenery and sunbathing out on the lanai. The overall presentation is so perfect, I can’t bring myself to unbox these beauties. Now if only they made scale-model replica of their house, or even just the lanai, that might be enough to let them come out for air.

Fun fact: My first trip to Disney World at age 7 included a side-trip to MGM Studios (as it used to be called) where we took the backlot tour and got to see the actual model they used to film The Golden Girls house exterior shots. Sadly, I learned the model house no longer exists. But for some reason as a 7-year-old in 1988, I was really, really excited to see it. I was a weird child. 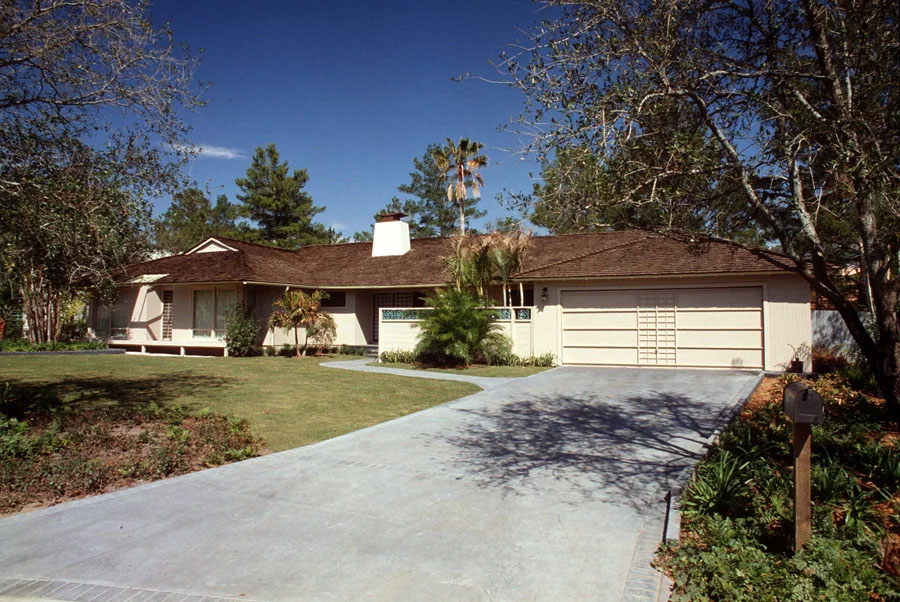 In the currency of pop culture appreciation, The Golden Girls are experiencing something of a revival lately. Besides action figures, there’s clothing, drinkware, FUNKO Pops, Golden Girls editions of classic board games (I own Clue!), adult coloring books, even Chia Pets. I don’t know what it is about The Golden Girls in particular versus other ’80s sitcoms that has so much appeal when it comes to mass-produced merch, but I’m absolutely here for it.

NECA’s attention to detail on these figures is great, and I especially appreciate the fabric clothing. From Dorothy’s unflattering frock to Blanche’s tailored yellow suit, these costume choices are on point. One of the highlights of watching The Golden Girls, at least for me, is the neverending fashion parade of late 80’s geriatric style. The floor-length nightgowns draped beneath floral robes, the pastel track suits, the bedazzled evening gowns…I can only dream of being that glamorous in my golden years.

Let’s take a closer look at each Golden Girl. To make things extra fun, I’ve ordered them from most to least sassy:

Sass level: Off the Charts, even for a Sicilian 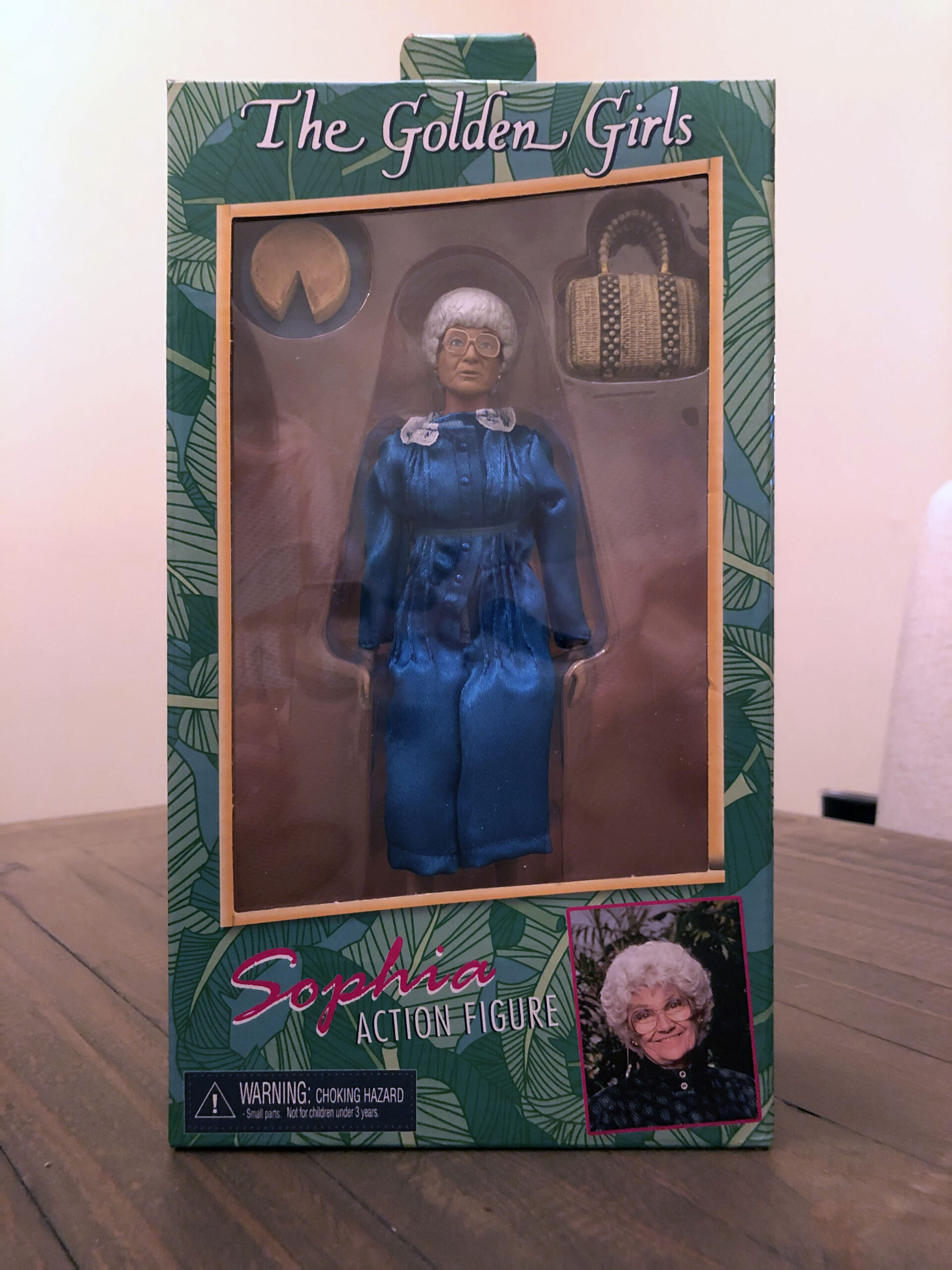 Sassiest Sophia quote: “Never go in against a Sicilian when death is on the line!” Oh wait, I might be getting my pop culture references mixed up… Here’s an actual Sophia quote: “Fasten your seatbelt, slut puppy, this ain’t gonna be no cakewalk!” 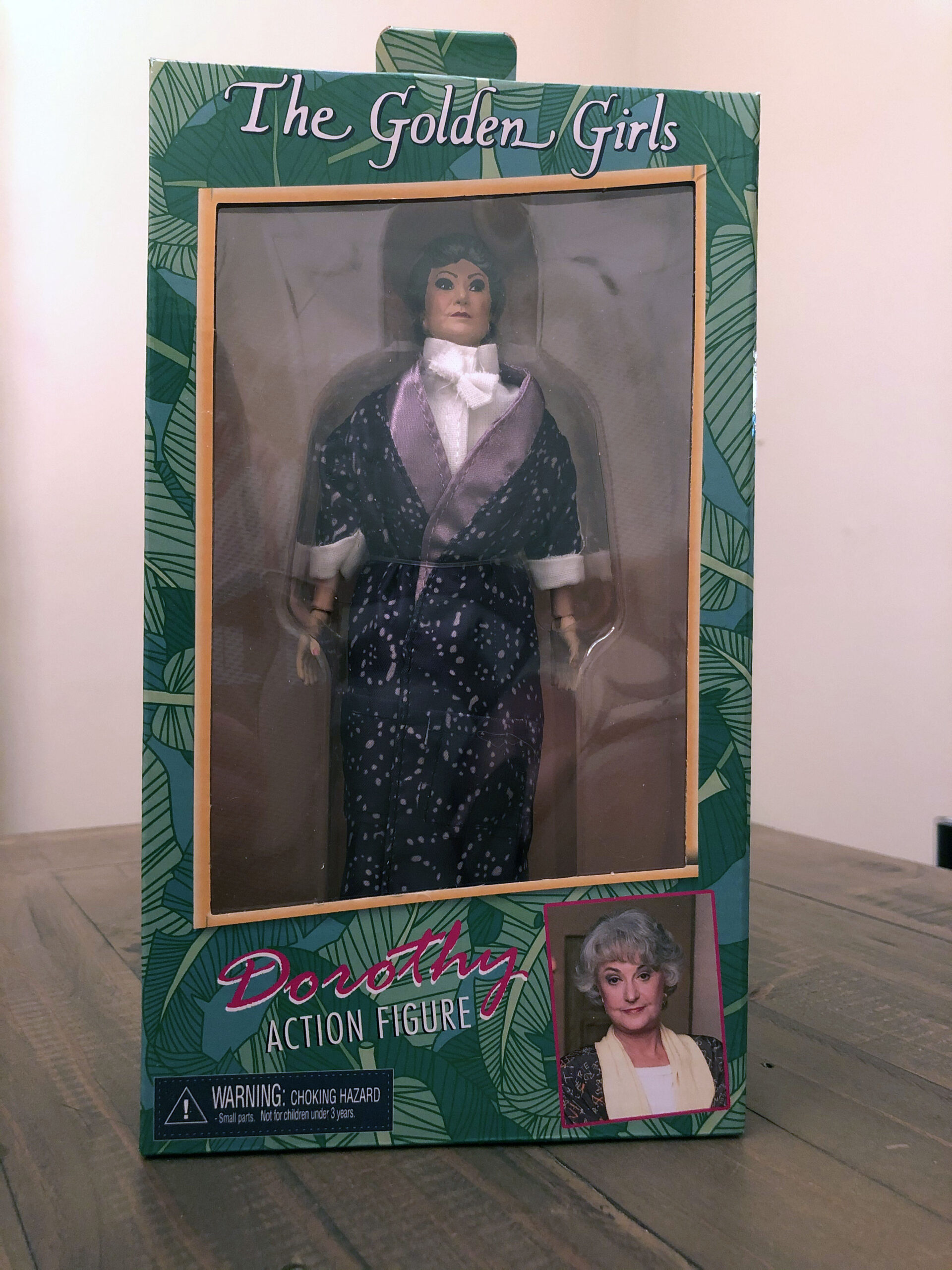 Sassiest Dorothy quote: “If I had that money I could have moved into a swinging condo instead of living with—I better not say anything until I’ve had my coffee [sips coffee]—a slut and a moron!” 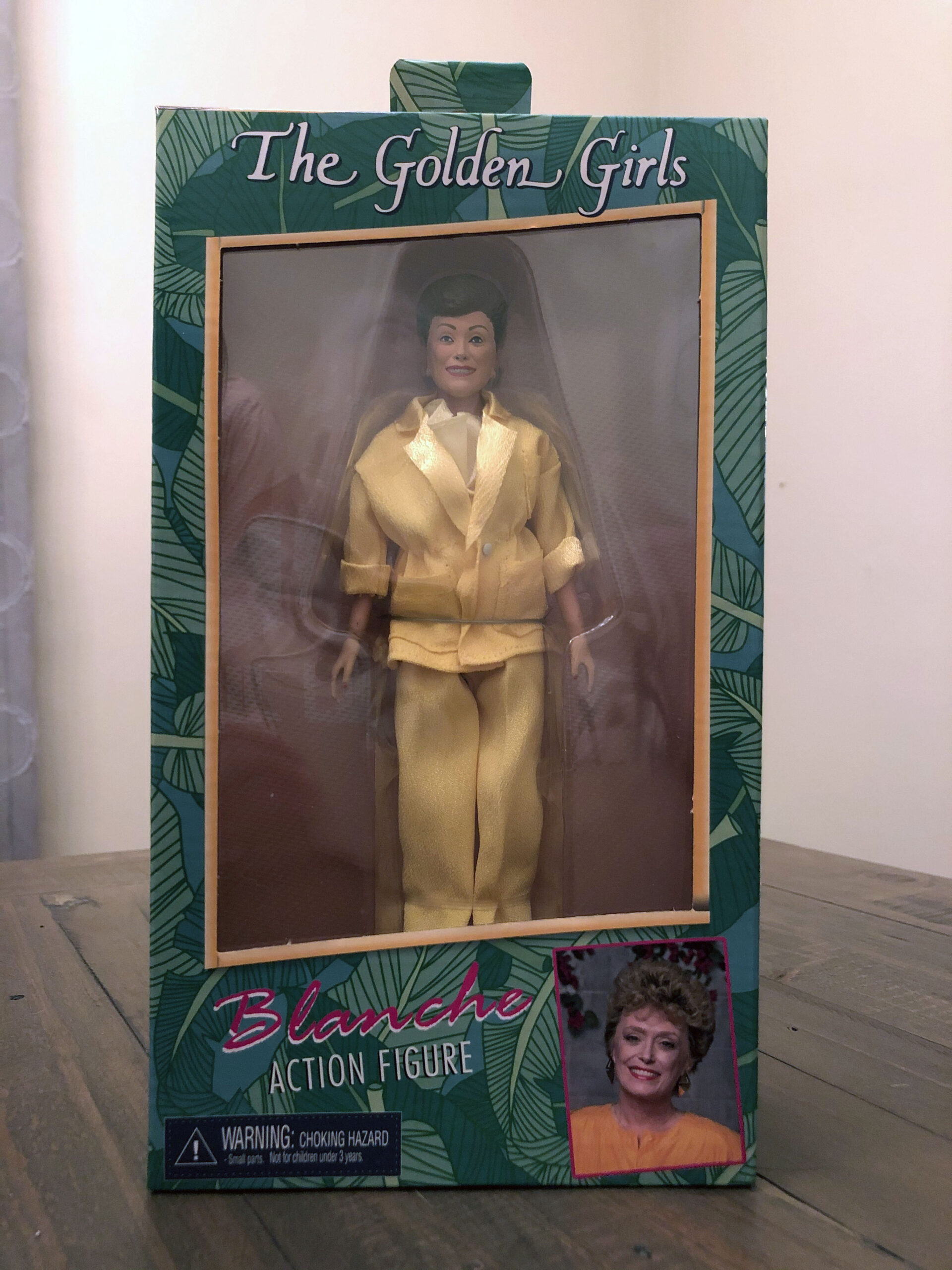 Sassiest Blanche Quote: “You know how fragile men’s egos are… Do the smallest thing such as scream out the wrong name and they go to pieces!”

Sass level: Two Slices of Cheesecake (Not Very, Unless Provoked) 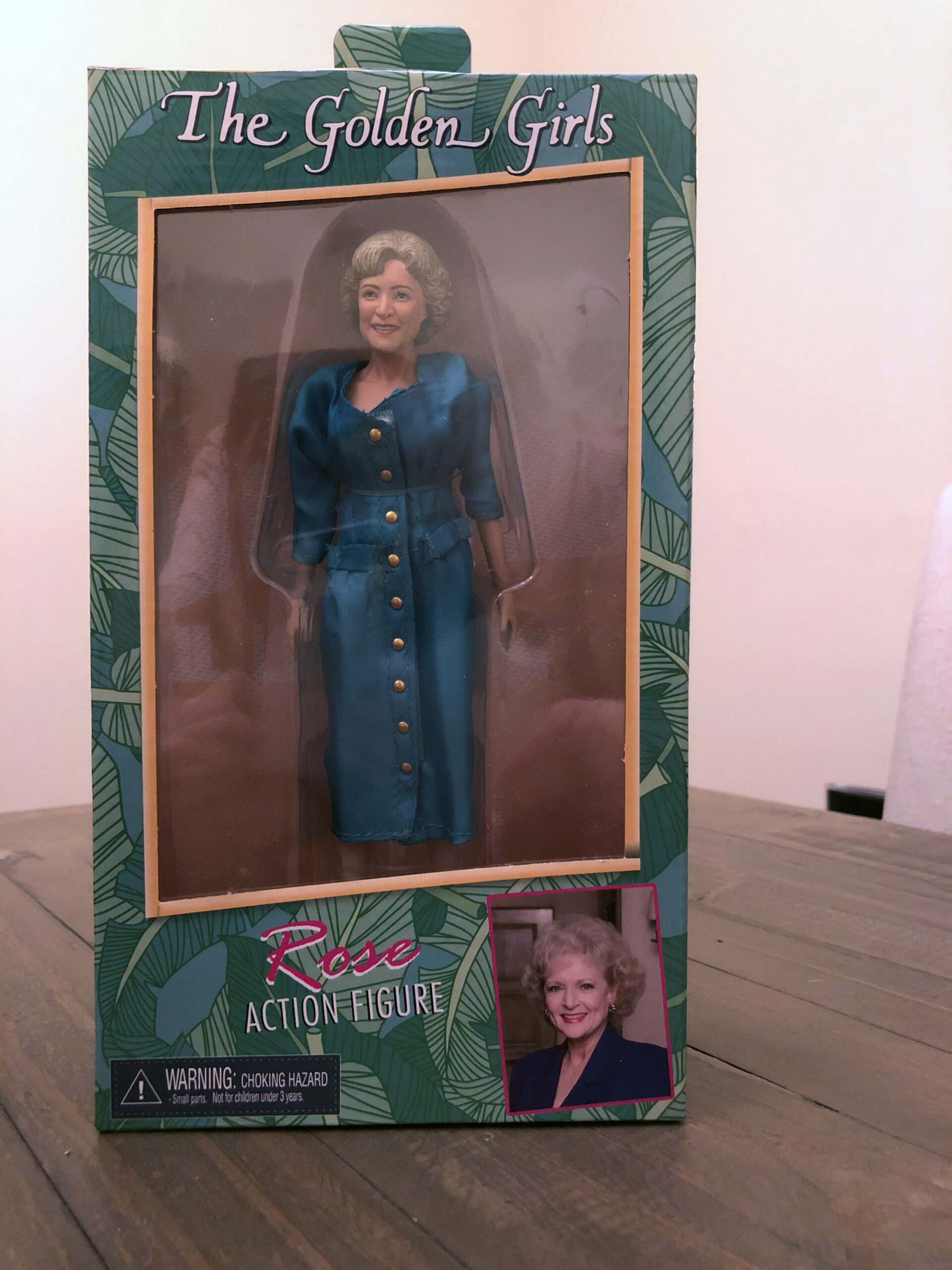 Sassiest Rose Quote: “Gee, with only three hours’ sleep, I can be as bitchy as you!”

BTW, thank you to my husband Shawn for this amazing Christmas gift. Your heart is true. You’re a pal and a confidant.