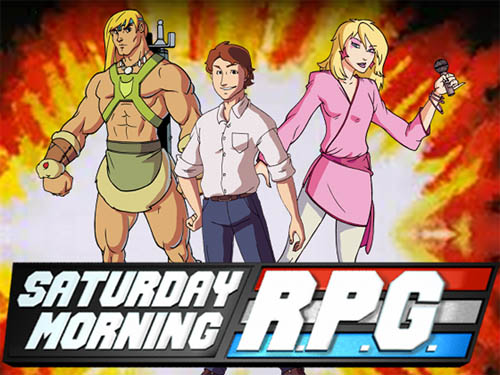 You can’t travel back in time to those Saturday mornings you spent in your Spider-Man Underoos watching cartoons with a bowl of Fruity Pebbles, but Saturday Morning RPG is the next best thing. I want to thank fellow League member Jason of Rediscover the 80s for calling such awesomeness to my attention.

Saturday Morning RPG is an episodic role playing game from Mighty Rabbit for iOS (iPad, iPhone, iPod–sorry, no Android version yet) that is basically an homage to every cartoon you remember from the 80s, as well as video games, movies, music, toys and other slices of kid pop culture from the era. This review covers Episode I: Dream of Destiny.

You play as Marty, a typical high school student whose girlfriend, Samantha, is kidnapped by the token bad guy, the evil Commander Hood, who plans to make her marry him. In typical RPG fashion, Marty rushes to defend his beloved but is overcome with defeat and swears revenge.

Luckily, a Powerglove-wearing wizard named, ahem, “The Wizard” (so rad!) comes to Marty’s aid and grants him the ability to unlock the hidden magic in everyday objects–stickers, batteries, Atari joysticks, chewing gum, Nerf balls, whatever!–and use them as powerful weapons and buffs. With the help of a magical Trapper Keeper that unleashes his new found powers, Marty sets out on a quest to rescue Samantha and take on Commander Hood.

The bright, colorful graphics are a mix of old school and new, with characters that are intentionally pixelated, like a throwback to the 8bit sprites of NES games. The backgrounds, menus and text have a more polished, comic book-style look and feel. The game is 2D for the most part, but there are some 3D areas to explore. It’s a fun mix of different visual styles that work well together.

It’s your standard Japanese-style RPG with a turn-based combat system. However, the battles in this game are really fun and unique, making good use of the touch screen. Combat is fast-paced, often surprising, and involves lots of screen-tapping. Most abilities require you to tap the screen at just the right moment to unleash their full power. Clumsy tapping can result in under-powered abilities or wasted turns (bogus!). 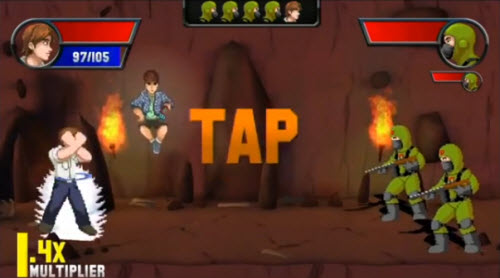 In addition to your basic bare-knuckled “attack” move, Marty can consume batteries that grant bonuses and attack multipliers, and use items that cause damage or heal. My personal favorite is the sparkly glove that unleashes a Moonwalker special move that paralyzes enemies. You are limited to only a small handful of each item for every battle, so you’ll have to use them wisely. 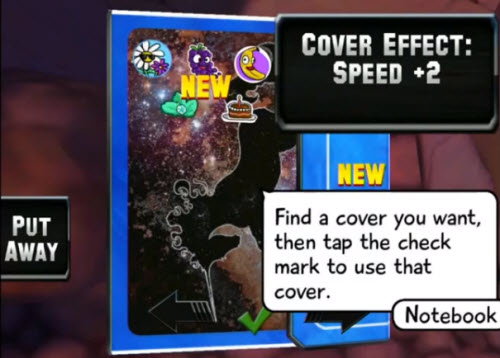 You can also find magical Scratch N’ Sniff stickers that grant Marty powerful buffs; this is actually one of the coolest elements of the game. Before every battle, you have 5 seconds to scratch off as many stickers as you can, gaining whatever bonuses they contain, like more health. The more you scratch, the more you gain. Now Apple just needs to invent iSmell.

The soundtrack is just as retrotastic as you’d expect, sounding like a blend of 80s cartoon themes, electric guitar riffs, keytar solos, epic battle anthems, and “tough guy” action music (you know what I mean, right?). Sound is used to great effect for all the various objects you can use in battle, turning the pages of your Trapper Keeper, scratching stickers, and interacting with the environment. I kind of wish we got to hear the character’s voices, though.

Other stuff I wanna mention…

I really appreciate the attention to detail in this game. There are lots of little touches that really capture the spirit of the 80s and Saturday morning cartoon culture. For example there are McDonald’s references, which in this world is “RcAstley’s” and Happy Meals are called “RcMeals.” Obviously, opening the boxes means getting RcRoll’d!

There are also plenty of achievements to unlock, which are of course riddled with in-jokes and pop culture references, like “Life Moves Fast” and “Stop and Look Around” (Bueller? Bueller?). Social media is well-integrated, as the game allows you to chat with other players and post your achievements to Twitter and Facebook. I’m not really a fan of social gaming and hate to clutter up my friends’ activity streams with that kind of crap, but at least this game doesn’t force it on you. The social options are there if you want them, but they’re not a requirement.

With this first episode being free, and additional episodes only costing $1.99 each, this much nostalgia is well worth the tiny pricetag. An “Endless Battle” mode where you fight off waves of non-stop enemies will also be coming soon in a free update. Saturday Morning RPG is a must for any gamer who grew up in the 80s.

So now you know! And knowing is half the battle.