Not that it’s much of a secret around here anymore, but it’s time for a serious Halloween confession: I don’t like candy corn. In fact, I loathe it. 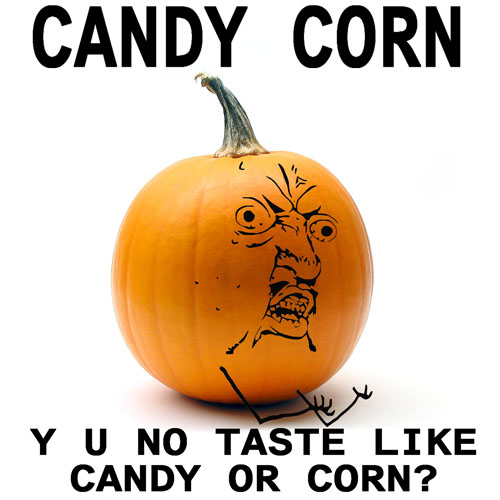 (Image credit: someone on the internet who is now my hero.)

Ever since I dared to express my unflattering opinion of Candy Corn Oreos–and by extension candy corn itself–I’ve incurred the wrath of the candy corn faithful. (Well, okay, “wrath” might be a little strong. It’s more like general disapproval and a few snarky tweets.)

To further fan the flames of The Great Candy Corn Debate of 2012, I checked in with ShezCrafti.com correspondent-of-the-now Mick Dundee, who weighed in with the following:

In response to this FIRESTORM OF CONTROVERSY, The Goodwill Geek wrote this measured response which sums up my feelings rather perfectly, and I quote: “Candy Corn will go marching on, long after we are all dead… serving as a tireless, never-ending symbol for Halloween. But that does not mean it needs to go in my mouth.”

And so, dear readers, my poll for the month of October is simply this:

Please direct all pro-candy corn sentiments and letters of support to Reis O’Brien.