The first random thing that popped into my head (well, besides Bon Jovi’s “Dead or Alive”) after seeing today’s assignment from The League, was an animated Disney short from 1956 called A Cowboy Needs a Horse. I surprised myself by thinking of it, because this cartoon is one of those things from the obscure, nearly-forgotten minutia of my childhood that I’m constantly rediscovering in weird ways (quite like Questron and the Clue VCR Mystery Game) ever since I started blogging. 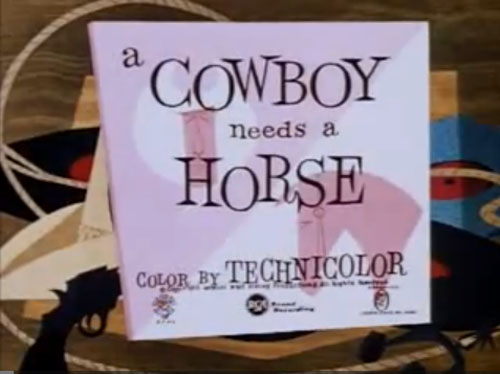 A Cowboy Needs a Horse (which you can watch in its entirety on YouTube right here) is about a little boy who goes to sleep one night and dreams of being a cowboy. As he slumbers, an incredibly repetitive song of the same name accompanies his transformation from an ordinary boy into a cowboy complete with a horse, a rope, a song, a hat, a pair of fancy boots, and a set of shiny spurs, which are all “drawn” into the scene. It’s all very Little Nemo-ish and the animation is classic Disney.

Here’s the song. Please don’t hate me after it inevitably gets stuck in your head!

Since I was born in 1981, I’m obviously too young to have remembered this cartoon when it was new. My introduction to it was in the form of a Disney Sing Along Songs VHS tape that I got for Christmas one year–this one, to be precise:

If you’re around my same age, you might remember these things. They were a series of home video tapes that featured a compilation of songs you could sing along to from both animated and live-action Disney movies and shows. Most memorably, kids were encouraged to “Follow the bouncing ball!” which looked like the Mickey symbol and helped you keep time with the lyrics. (And I swear to this day, the insanely catchy intro song from these tapes still gets randomly stuck in my head sometimes.)

This week’s assignment from The League of Extraordinary Bloggers was simply the word, “cowboys.” Here’s how my fellow extraordinary bloggers interpreted this fun topic:

*I’m early this week (for once!). I’ll update this section with more links as more folks turn in the assignment.