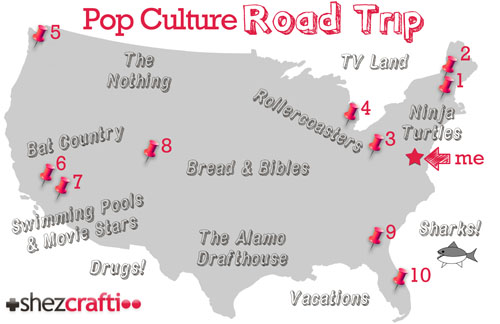 This week The League of Extraordinary Bloggers is going on a road trip! But not just any road trip–the ultimate pop culture road trip. Though I could easily rattle off dozens if not hundreds of pop culture landmarks I’d love to visit someday before I die, I had to cut the list down significantly when I realized that most places I’d want to visit (A) don’t actually exist (Shermer, Illinois; The Double R Diner), or (B) aren’t reachable by roads from where I live (The Beatles Story; Highclere Castle).

So, after much Googling and fantasizing about places I could realistically visit in America, like on an actual road trip, I think I’ve pinned it down to these ten pop culture destinations: 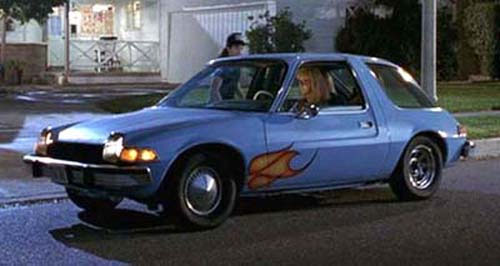 Where is it? Laconia, New Hampshire 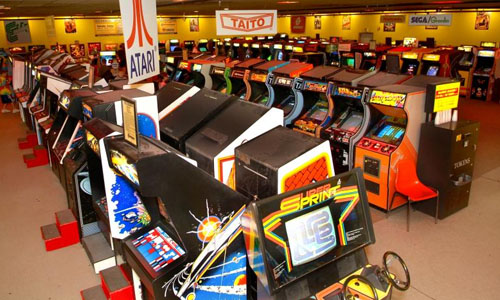 The American Classic Arcade Museum is part of Funspot Family Entertainment Center, a huge arcade in Laconia, New Hampshire that is officially recognized by Guiness World Records as the “Largest Arcade in the World.” The museum is dedicated to preserving arcade games throughout history from its pre-electricity inception. I would be in retro gaming heaven in this place.

Where is it? Waterbury, Vermont

Since I’d already be up in New England, I figure why not swing by Ben & Jerry’s ice cream factory in Waterbury, Vermont? I am a huge fan of Ben & Jerry’s ice cream as well as the company itself for its social values and interesting history. I’m fascinated by the production process and love shows like “Unwrapped” that show you how your favorite foods are made. I’d also love to visit the real life “Flavor Graveyard” so I can pay my respects to Bovinity Divinity. Plus, FREE ICE CREAM! Touring this place would literally be a treat.

Where is it? Bellaire, Ohio 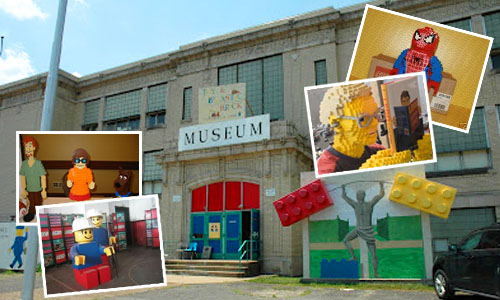 At the Toy and Plastic Brick Museum in Bellaire, Ohio you’ll find the world’s largest private collection of LEGO. In case you’re wondering why it’s not called the LEGO Museum, according to Roadside America, the owner, Dan Brown (not THAT Dan Brown) was forced by the LEGO corporation to change its name. Commonly known as “The Unofficial LEGO Museum,” this place is 36,000 square feet of amazing super-sized LEGO creations, artwork, and animatronic displays. Check out this gallery to see what’s inside.

Where is it? Somewhere in Ferndale, Michigan 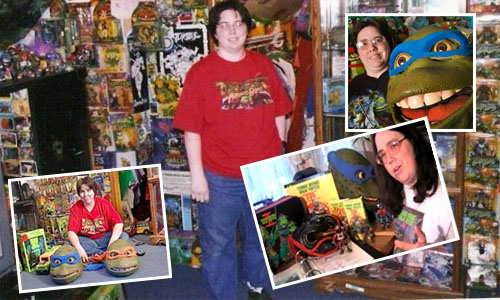 Michele Ivey, the superfan behind Cowabunga Corner & TMNT-L is one of the biggest Teenage Mutant Ninja Turtle fans in the world and has a massive collection of TMNT merchandise and memorabilia, including extremely rare and valuable pieces like props from the live-action films. Her house, or wherever she keeps all this stuff (the East warehouse on Lairdman island??) is probably the closest thing to a museum that exists for TMNT fans. If I ever had the chance, I would totally pay money to gaze upon her collection. Michele, if you’re reading this, (I’m not stalking you I swear!) have you ever thought about opening up a TMNT museum?

Where is it? Astoria, Oregon 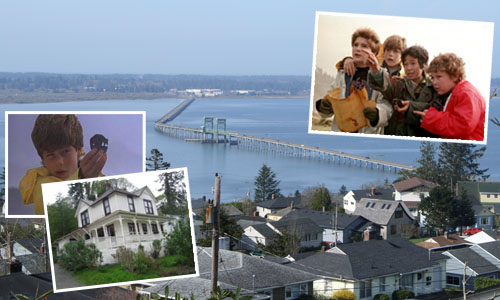 Am I crazy for wanting to go on a cross-country pilgrimage just to visit some locations from one of my favorite movies of all time? Yeah, probably. I suppose I could also make a trip to Astoria about Kindergarten Cop, but let’s be real here. I’d be doing it so that I can finally say I’ve done the truffle shuffle outside of Mikey’s house and cross it off my list of life goals. As a general rule, I only set life goals that are stupid and that I’m 100% certain I can achieve.

Where is it? Norwalk, CA 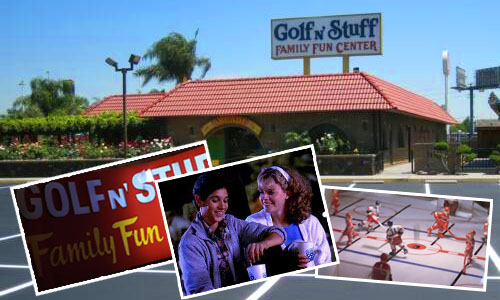 Continuing my tour of iconic landmarks from my favorite childhood movies, I couldn’t go to the west coast without a trip to Golf N’ Stuff, the arcade and minigolf center where Daniel and Ali spend their first date in Karate Kid, immortalized in the best “first date” movie montage OF ALL TIME.

Where is it? Cabazon, California 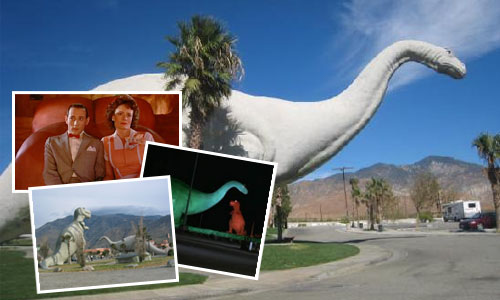 I’m already in California, so may as well swing by Claude Bell’s famous Cabazon Dinosaurs, which feature prominently in two more of my favorite 80s movies, Pee Wee’s Big Adventure and The Wizard. After I take some cool photos, I’ll go for grub and pie at the adjacent Wheel Inn Restaurant. I will skip the Creationist Museum, however.

Where is it? Estes Park, Colorado 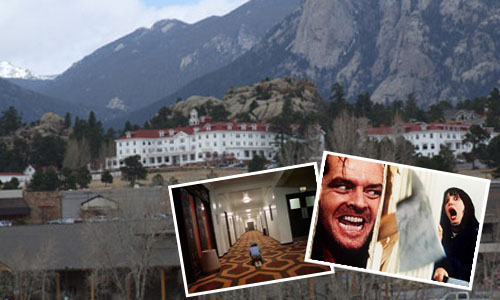 I can’t think of many more places that would be as big of an attraction for horror fans than this one. The Shining is my favorite horror book and movie of all time. The Stanley Hotel is the place where Stephen King was inspired to write The Shining. The hotel embraces its pop culture status by showing an uncut, R-rated version of The Shining on continuous loop on all guest room TVs; so awesome. Oh, did I mention the place is supposed to be really haunted too?

(Trivia: Film buffs know that the infamous Overlook Hotel as seen in the Stanley Kubrick movie was actually filmed completely on elaborate sets, with establishing shots of Timberline Lodge serving as the hotel’s exterior. However it was used as the hotel in the 1997 made-for-TV version of The Shining…which I don’t recommend, by the way.)

Stop #9 – Jim Henson Exhibit at The Center for Puppetry Arts

Where is it? Atlanta, Georgia 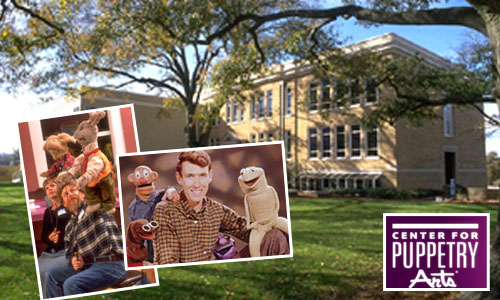 I want to thank Shawn over at Branded in the 80s for introducing me to The Center for Puppetry Arts in Atlanta, which is home to the Jim Henson exhibit of over 700 retired Muppets. After reading about his recent trip there, I just had to include it as a stop on my road trip, especially after seeing that this place has creatures from Labyrinth and The Dark Crystal, two more of my favorite 80s films (are you noticing a pattern here??).

Where is it? Universal Studios, Orlando, Florida 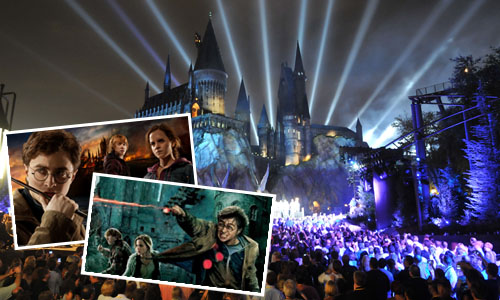 The final stop on my ultimate pop culture road trip is Universal Studios, Orlando Florida to visit The Wizarding World of Harry Potter. I’ve only been to Universal Studios once in my life–thankfully before they shut the Jaws ride down forever–and as a huge fan of Harry Potter I would love to tour Hogwarts Castle and knock back a few Butterbeers. I love theme parks anyway, so I can only imagine how much fun a Harry Potter theme park would be, minus the inevitable swarms of sweaty people.

I already have the perfect road trip song picked out. Now I just need a musical travel montage to make going to all these awesome places possible in a matter of seconds!

Other Cool Pop Culture Destinations from The League

Won­der­ing what this is all about? This week’s assign­ment from The League of Extra­or­di­nary Blog­gers was to plan out the ultimate pop culture road trip. Here’s where my fellow Leaguers went: