Through the Years: Ken’s Raging Metrosexuality

As a male fashion doll, Ken has always been quite the metrosexual, but these decade mugshots really emphasize his questionable sense of style through the years: 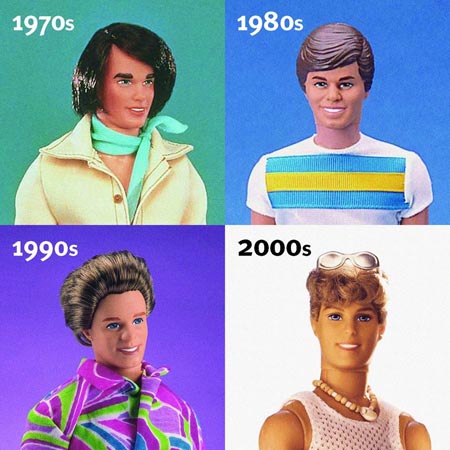 Let’s start with 1970’s Ken. What do you suppose that scarf is hiding? I have a few NSFW theories but I’ll leave them to your imagination. His healthy, perfectly manscaped eyebrows are enough to make Brooke Shields weep with envy.

I’ll let 1980’s molded plastic hair Ken off the hook. The only thing he’s guilty of is looking like a smug, yuppie asshole, which was the pinnacle of male fashion back then. The only thing he’s missing is a Lacoste sweater draped delicately over his shoulders, sleeves folded in a tidy knot.

Other than dressing like he raided Joey Gladstone’s wardrobe, 1990’s Ken wouldn’t be so bad if he could just get that bouffant under control. If there was ever such a thing as the exact opposite of cool, it is this Ken Doll’s hair. On the bright side, he’ll probably never need Rogaine with Minoxidil.

By the 2000’s, Ken has been completely emasculated, possibly on purpose, as his drastic change in appearance indicates a possible shift in strategy for Mattel, who are clearly trying to capitalize on the disposable income of the expanding GLBT market. As a suitable male companion for Barbie–or any woman, for that matter–frankly, this shit is just not acceptable.