I’d rather be in a ‘Coma’ than waste 4 hours of my life watching this one.

I’m sorry, was that too harsh?

Last night’s conclusion to A&E’s “four-hour epic mini-series” COMA left me feeling incredibly underwhelmed after what I felt was a solid opener. I’ll admit to falling prey to clever marketing: for a made-for-TV movie, phrases like “presented by Ridley Scott” and “star-studded cast” tend to resonate with me. I mean, just look at the names at the top of this poster: 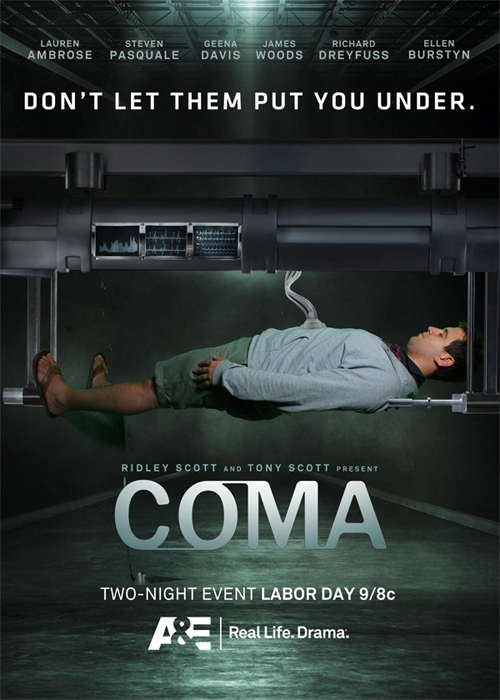 The answer is every which way imaginable. First of all, even though it’s “presented” by the Scotts, it’s not directed by either one of them so don’t bother getting excited about that. Secondly, even though it boasts some big names, the majority of COMA stars Lauren Ambrose and Steven Pasquale, and neither of them are exactly what I’d call a great actor. Outside of the big stars, the acting was pretty atrocious all around, but bad dialogue is certainly to blame as well. Though it had slick production values and looked good for a TV movie, the direction and editing felt on par with an episode of CSI. Blah.

The biggest problem with COMA, however, is how painfully obvious the plot is. I confess, I have not read the bestselling book this movie was based on, nor have I seen the original 1978 film. From what I understand, it’s one of those twisty-turny thriller types with a lot of slow-building tension and a huge twist ending. That’s a movie I would like to see. A&E’s version, however, seems to spoil the mystery early and spends the rest of the time beating you over the head with it. Once you know what’s really going on at the creepy Jefferson Institute, there’s no reason to keep watching. Every scene is painfully dragged out and felt like it was padded to fill up the four-hour time slot. By the third hour, I was bored out of my mind and kept watching out of sheer desperation that it would get better.

This is one of the first times in a long time that I’ve actually made an effort to commit to a “two-night television event,” as I typically prefer to let them pass me by and wait for the reviews to roll in before deciding if it’s worth my time. I sorely regret not having done so in this case. I mean, four hours is a LOT of time to commit to something that sucks this much, so consider this a public service announcement if you haven’t seen it yet.