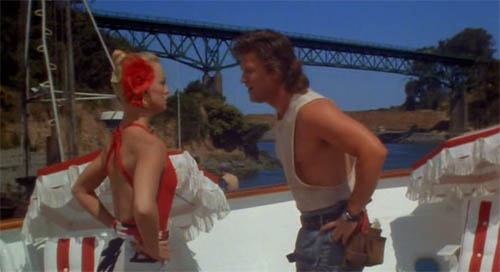 Kurt Russell: great actor or the greatest actor? That’s the question posed to The League of Extraordinary Bloggers this week. Well, okay, to be honest I just made up that question. But we really are supposed to write about Kurt Russell, even if you’re not a big Kurt Russell fan or think he sucks–in which case you would, of course, be wrong.

Kurt Russell is one of those versatile actors who can play practically any role. The guy can do (and has done) everything from badass action movies (Tombstone, Big Trouble in Little China) to comedy (Captain Ron, Tango & Cash). Like Golden Corral, he’s got something for everyone. But I won’t drone on about how awesome (even if awesomely bad) Kurt Russell’s movies are because I’m unfashionably late to this week’s League topic due to being on vacation in Myrtle Beach and everyone else has already beaten me to it.

So, in keeping with my running theme of beach and ocean-themed posts this week, what I’d like to do instead is write about one of my personal favorite Kurt Russell movies, Overboard. 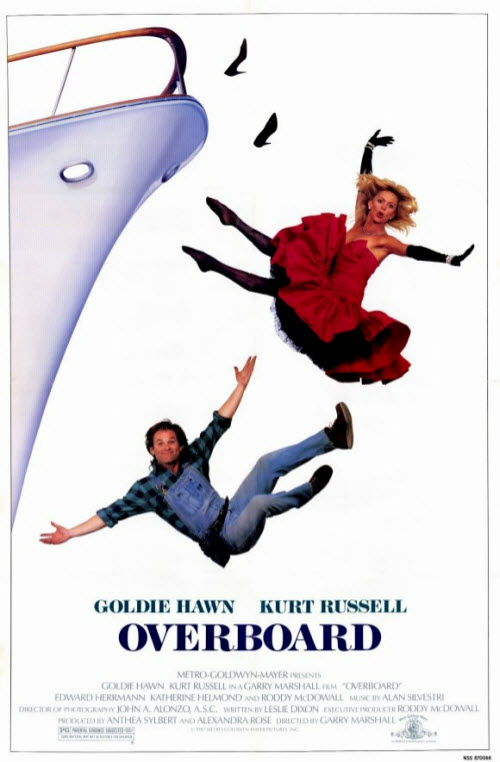 For those who have never seen it, it’s easy to dismiss Overboard as cheesy romantic comedy, which it is, complete with a Randy Newman song. But look a little closer and you’ll find a movie that’s hilarious on so many levels–and not just because it’s a reminder of everything embarrassing from the ’80s like frizzy perms, Pee-wee Herman, and brick-sized cordless phones. It’s got an absurd plot, a northwest small-town setting quirkier than Twin Peaks, and ridiculous but lovable characters who deliver extremely quote-able lines like:

Or am I the only one who quotes this movie incessantly? Okay, I’m getting ahead of myself here…

In Overboard, Kurt Russell stars as Dean Proffitt, a lowly, down-on-his-luck carpenter who’s also the single dad of four boys. One day a luxury yacht makes an emergency repair stop in the small, redneck town of Elk Cove, Oregon, and it’s mega-rich, superbitch owner Joanna Stayton (Goldie Hawn) hires Dean to remodel her closet on a whim. When he doesn’t do the job to her satisfaction, she stiffs him on the payment and pushes him overboard, along with all his tools.

Later that night, as the yacht leaves the harbor, Joanna tries to retrieve her lost wedding ring from the deck but accidentally falls overboard. She washes up on the Elk Cove garbage scow with a serious case of amnesia–and since this is the most exciting thing happening in Elk Cove, it makes the local news. Dean Proffitt doesn’t waste any time taking advantage of the situation. In an attempt to get even with Joanna, he shows up at the local hospital to claim her as his wife so he can bring her home and make her work off what she owes him. (Like I said, it’s ridiculous.*)

And because this is the ’80s and anything goes in these movies, they obviously end up falling in love. Even after Kurt Russell delivers an epic insult right to Goldie Hawn’s face:

How does Overboard only have a 6.4 rating on IMDB? Come on, The Internet, this movie deserves at least a 6.5.

Other Kurt Russell Awesomeness from The League: