It’s not every day you stop by your parents’ house to drop off the kids and they randomly hand you a rare artifact from your childhood because they just so happened to clean out the attic over the weekend, but that totally happened to me this past week. 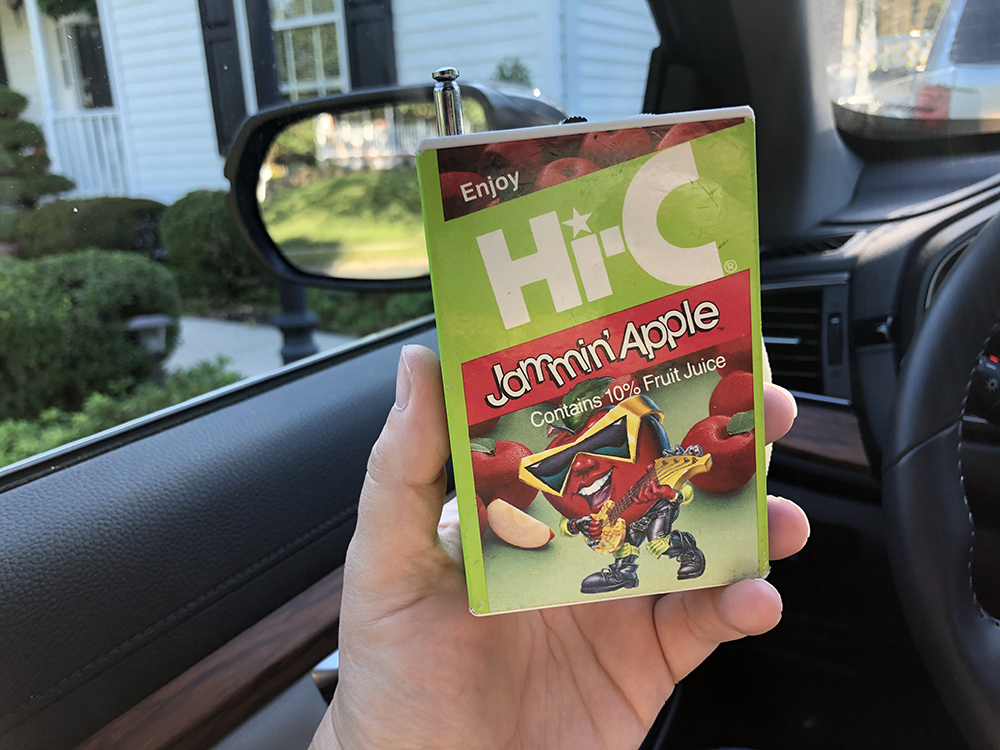 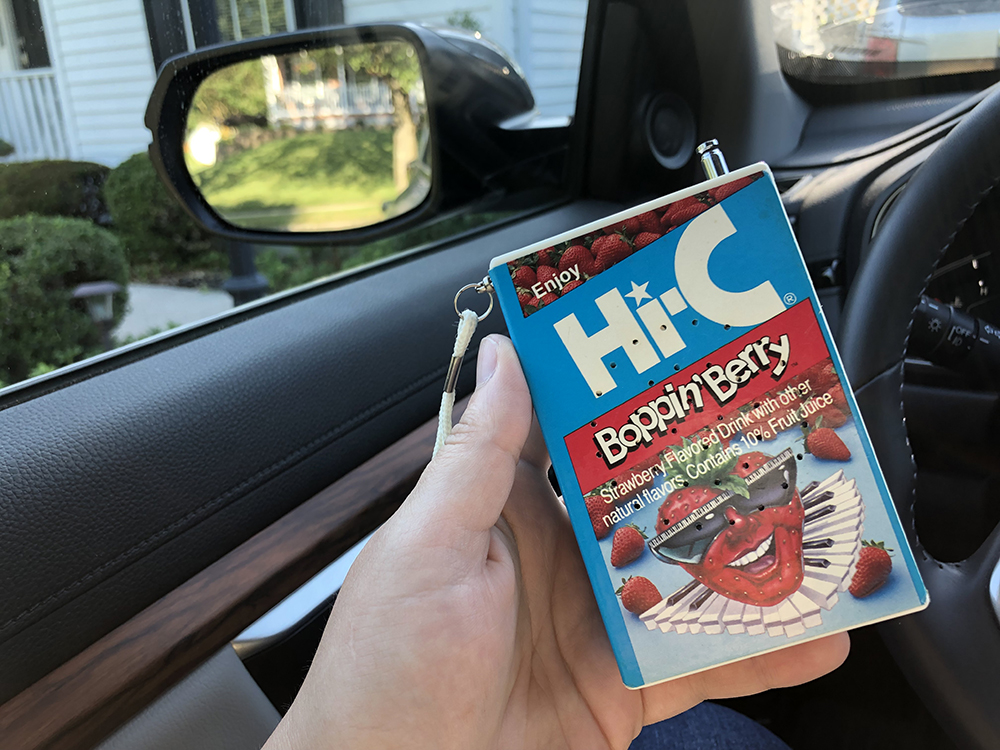 I was so god damn excited to see this thing again, I took these photos as soon as I got back in my car and immediately texted them to my husband, who, apart from me, is one of the only people I know who could possibly understand my excitement for obscure food-related promotional products.

I probably haven’t laid eyes on this thing in over 25 years. I don’t know what I’m more amazed by — that my parents kept it for all these years, for God knows what reason, or that it’s still in excellent condition. Can you believe they were actually going to throw this thing out? Fools.

To answer your follow-up question: yes, it still works.

Well okay, I didn’t say it worked well. Lots of static. I’m sure it doesn’t help that I’m pretty sure I kicked sand into this thing on a family beach vacation back in 1993.

The World of Jammin’ Apple and Boppin’ Berry

Like countless other kids who grew up in the 90s, Hi-C juice boxes played a starring role in my school lunches. For some reason, my elementary school didn’t allow cans of soda, so juice boxes were the next best thing…because cans of sugary soda = bad, but boxes of sugary juice = ok? Yeah, I don’t get it either.

I can recall Jammin’ Apple and Bobbin’ Berry, specifically, as being my go-to flavors at the time, and not just because they tasted good, but because the marketing for them was so fucking on point.

I mean JUST LOOK at this freakin’ commercial:

I love everything that’s going on here. It starts off with dancing juice boxes — okay, solid. But then WHOA, wait a minute, we’re suddenly traveling through the straw to go INSIDE the juice boxes! WHA??? HOLY SHIT! There’s a whole world in there! A world filled with stylishly dressed kids dancing to club music that sounds like a knockoff of Technotronic! And they’re playing fruit instruments! And OMFG some of the kids transform into Boppin’ Berry and Jammin’ Apple! That’s a world I want to live in. It’s so unashamedly early 90s. I freaking love it.

I wasn’t aware of this until I started specifically looking for it, but apparently, the marketing push around Jammin’ Apple and Boppin’ Berry also included a starring role in a New Kids On the Block comic at the time — no, seriously!  Check out this article by my friends over at Pop Rewind for a closer look at the comic, as well as some other cool promo materials. Simply mind-blowing. No wonder I was drinking this stuff like it was going out of style. Those crafty marketing execs at Hi-C had their hooks in me deep.

So how did this radio come into my possession? Well, here’s a fun fact about my grandfather (RIP): he was a buyer for the entire east coast region of A&P grocery stores, which at one point in history was the largest grocer in the U.S. This is relevant because it used to mean he would sometimes get exclusive access to freebies and promotional tie-in items that food brands were using to promote their product lines in a bid to buy up more shelf space in the physical stores. Being the awesome grandpa that he was, he would often bring those items home and give them to me and my older sister. Over the years when he was still active in his career I was given all kinds of promo items and “shelf display only” items because of him, including stuff from Coca-Cola, Hershey, Klondike, Dole, Green Giant, and of course Hi-C. This juice box radio was probably one of the coolest free pieces of schwag he ever brought home.

Here’s some more “glamour” shots of my Hi-C radio, courtesy of my husband, which looks fantastic and so summery by our pool. Enjoy! 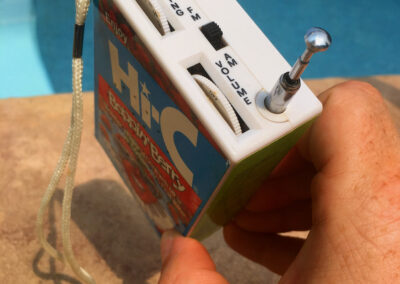 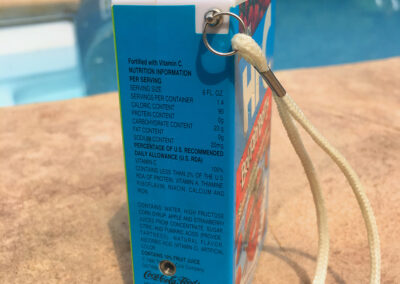 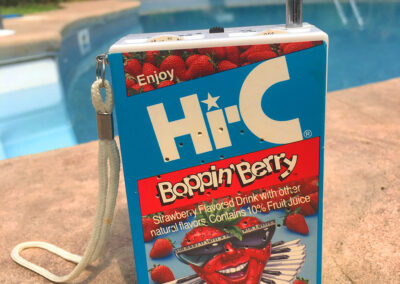 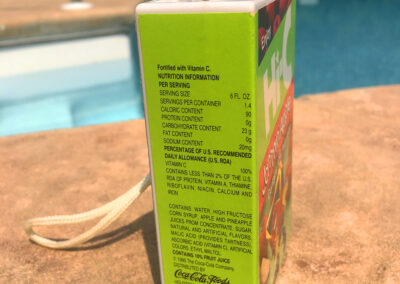 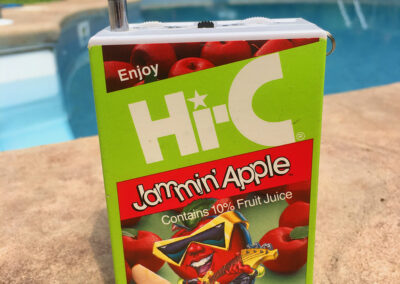 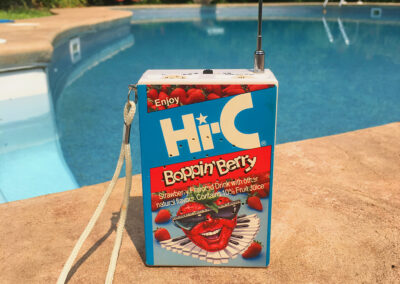 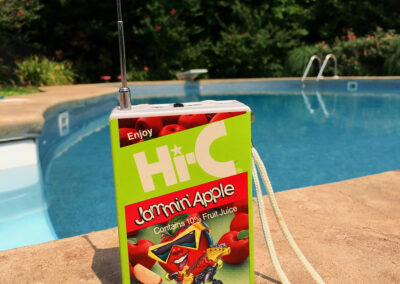