According to your votes, Andy is the most worthless Goonie.

Welcome to February, the month you don’t care about unless you’re black, in a relationship, or live in New Orleans. (February can fuck off as far as I’m concerned, but GO RAVENS!) Since we’re in a new month, I’ve officially closed my Goonies poll which asked, “Who is your favorite Goonie?” Thanks to everyone who voted.

All in all, I wasn’t really surprised at the results: 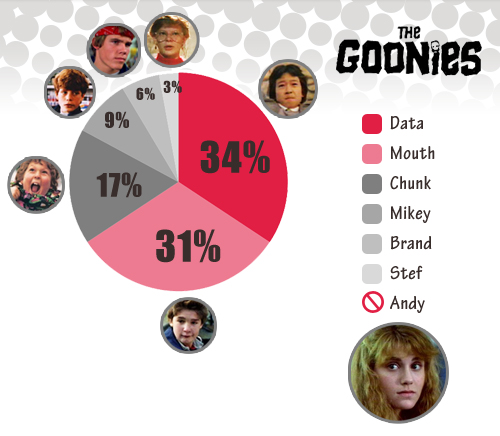 For most of the month, Data and Mouth were locked in a dead heat, but in the last few days The Pinchers of Peril finally clinched in Richard Wang’s favor. (Just for the record, I am Team Mouth.) Chunk truffle-shuffled his way into third place, and the rest of the votes were divided between Mikey, Brand, and Stef, who were–ahem–good enough. Which means…

Nobody voted for Andy.

NOT A SINGLE ONE. At the very least I thought she’d get “the hot vote” from one of you fools who used to crush on her, even though Stef strikes me as more experienced (protip: ugly girls are insecure, and thus more likely to put out), otherwise Troy wouldn’t be throwing pennies down wells wishing he could get laid. No wonder Andy doesn’t know how to play the bones, if you know what I mean.

Then there’s her annoying habit of screaming at anything that moves (omg a rake!) and setting off booby traps because like all dumb bitches, she’s incapable of following simple instructions, especially if there’s something sparkly and expensive nearby. Speaking of sparkly and expensive, HOW DOES SHE NOT KNOW BRAND DOESN’T HAVE BRACES? That’s how I know she’s stupid.

There can be no other conclusion: Andy is the most worthless Goonie.