Yesterday’s news of a young man found dead at an internet cafe in Taiwan is just the latest case of an increasingly common occurrence: dropping dead while playing video games. 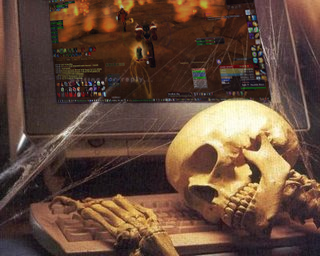 With the rise in popularity of “never ending” games like World of Warcraft, Star Wars: The Old Republic, and other online games that design their entire business models around keeping players hooked, video game addiction is an issue that’s getting a lot of attention lately.

But are the games themselves to blame, or does it come down to individual gamers who just don’t know how to take care of themselves? While many of us are able to play a lot of games and still lead (relatively) normal lives, it seems we’ve all known at least one other gamer who struggles to maintain a healthy gaming/life balance.

In my former WoW life, I never knew anyone who died as a direct result of playing the game—but I did witness firsthand how players’ addictions led to other terrible things happening in their lives. I knew people who lost their jobs, neglected their children, dropped out of college, and got divorced. And though they’d deny the root cause of these problems, it wasn’t hard for the rest of us to understand the consequences that go along with spending 15+ hours of every day logged in to a virtual environment.

Below are six woeful tales of people who died playing video games:

Just yesterday, Chen Rong-yu, a 23 year old Taiwanese man, died while playing League of Legends, a free online MMORPG, at an internet cafe in New Taipei city this past Tuesday. His body was found slumped over in a chair with his hands stretched out towards the keyboard and mouse. The most horrifying part is that none of the cafe’s other patrons noticed until NINE HOURS LATER. The ongoing investigation into his death reveals the gamer may have suffered from cardiac arrest triggered by a combination of tiredness, lack of movement, and cold temperatures.

Budding computer programmer Chris Staniforth, who was only 20 years old, died from playing too much Halo. His 12-hour marathon Xbox sessions caused a fatal pulmonary embolism, a type of blood clot that can occur when someone sits in the same position for several hours. Chris had just been accepted to Leicester University to study game design when he collapsed outside a UK Jobcentre after complaining of a low heart rate. He had no previous medical conditions.

An unidentified 30 year old man in Beijing died after spending three days immersed in an online game at a local internet cafe. He lost consciousness and was rushed to a hospital but could not be revived. According to reports, the man had spent more than 10,000 yuan (approximately $1,500) on gaming in the months before his death.

A 28 year old man from South Korea died while playing Starcraft for 50 hours with only few short breaks. The cause of death was presumed to be heart failure stemming from exhaustion. The man, who had eaten very little during his marathon gaming session, only stopped playing to go to the toilet a few times and for brief periods of sleep. He had recently been fired from his job because he kept missing work to play computer games.

WoW Gamer Kicked from Guild, Too Dead to Log In

Jerald Spangenberg, an avid World of Warcraft player, died while raiding with his WoW guild after getting into a heated argument during the raid. His cause of death was an abdominal aneurysm, presumably brought about by long periods of sitting at the computer combined with the stress of the argument. After Jerald suddenly went silent during the raid, he was auto-logged out of the game after 10 minutes of inactivity and did not log in again. His guildies assumed he was being childish and had deserted them, so they kicked him out of the guild and kept on raiding. It wasn’t until three weeks later that they learned what happened from Jerald’s daughter (and felt horrible about it).

A young Chinese girl known by her nickname “Snowly” died after playing World of Warcraft for several days straight during a national holiday. Snowly was a key member of her WoW guild, who said the girl had been preparing for a very difficult raid and had had very little rest in the days prior. An in-game funeral was held for Snowly in the week after her death, but sadly the event was overshadowed by the death of another popular WoW player during the same week.

Yes kids, it is possible to literally game yourself to death. May these stories serve as a warning to you, fellow gamers, to put down the controller every once in a while to eat and sleep. And for shit’s sake, get some exercise!