The most ridiculous(ly awesome) pirate songs I know.

My first impulse after seeing this week’s League assignment was “pirates” was to make a list of my Top 5 Favorite Pirates, but then I remembered I kinda already did that. It’s not the most meaty or well thought-out of posts, but then again I threw it together in ten minutes for National Talk Like a Pirate Day, which I almost forgot about, and if I’m being completely honest, I really wanted an excuse to work “Arrrrrrrrrrrrrrrrr” into my title as a verb. That’s just good writing.

My second impulse was to write about Sid Meier’s Pirates, the classic pirate sim game, but then I remembered only a small percentage of my readers give a shit about video games, so I’ll save that particular rambling for RunJumpFire. 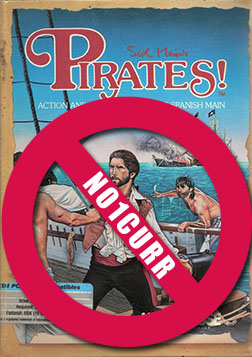 Also, thanks to Disney’s ability to milk its own theme park rides for obscene amounts at the box office, and Johnny Depp’s willingness to keep sucking on that teat, Pirates of the Carribean is usually the first thing I think of whenever I hear the word “pirates.” I don’t like that.

I will also never have generic pirate toys with rich and engaging backstories as cool as The Goodwill Geek’s, so I was kind of at a loss for ideas.

But then, all of a sudden, I remembered something important. Something profound. Something that dick-slapped me in the face with INSPIRATION.

I am a pirate!
And being a pirate is all right to be.
And more importantly,
I can do what I want
because a pirate is free!

Such liberation, such poetry comes from the greatest song about pirates (and most disturbing video) the internet has ever known:

by whatever cokehead pedophile is responsible for LazyTown

Okay, so what if it’s the de-facto theme song for anybody who’s ever downloaded anything illegally? (Which I’ve never done. EVAR.) You have to admit it’s fucking catchy. As in, I catch myself singing this all the damn time. And also pondering the lyric, “We’ll dig up the box–we know it’s full of precious booty!” That’s like a total euphemism, right? It’s also one of my life’s ambitions to learn Stephanie’s dance moves.

But anyway, I was energized and encouraged because I suddenly had my angle for this post: more awesome pirate songs.

“From the Seas to the Streets”

by Captain Dan & The Scurvy Crew

You guys, PIRATE RAP EXISTS! I’m not just talking about one single video here. THERE ARE LITERALLY WHOLE ALBUMS FULL OF THIS SHIT, with pirates rapping songs like “It’s All About The Booty” and “Real Swashbucklers (Throw Your Hooks In The Air).” I’d also like to take a moment to point out that Captain Dan & The Scurvy Crew refer to their website’s homepage as “home port.” I don’t know why this excites me, but it does.

This is almost as awesome as that time I discovered Ninja Sex Party. Except not quite, because ninjas > pirates.

“HOT Pirates of the Carribean”

A Symphony of the Word “Hot” by Hot Symphony

by some guy named Trey Green

Okay, this one I actually had no idea existed before today. I got to thinking deep thoughts, as is so often the case when I’m writing these posts, and said to myself, “Surely someone out there has made a song about pirates being gay.” A quick YouTube search later and I was well on my way to being enchanted by the sounds of Trey Green (who is NOT a gay pirate, disappointingly) with lyrics like, “We pillage, we plunder, for treasure and men, and for booty that’s free of disease.” Just think of every terrible pirate pun that could be twisted around to sound like something homosexual (poop deck!), and you’ll have a pretty good idea what to expect from this song. I like things that are straightforward if you know what I mean.

Oh hey, speaking of Gay Pirates, I was doing some “research” for this post (look, just shut up and stop judging me) when I stumbled upon THIS masterpiece: 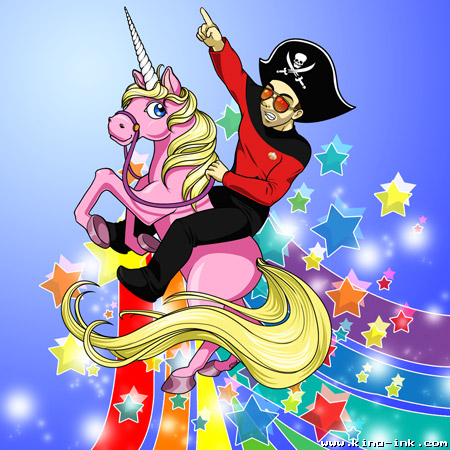 It’s a piece called “Gay Star Trek Pirate Unicorn” by an artist named Kina. I also feel compelled to point out that this was a commission. That’s right. Somebody out there envisioned this, and then paid an artist to birth this from her creative loins. Amazing.

YOU ARE A SMELLY PIRATE HOOKER.

Wondering what this is all about? This week’s assignment from The League of Extraordinary Bloggers was the topic “pirates,” which apparently won the vote against infinitely more awesome topics like “ninjas” and “robots.” (Really guys?) Anyway, here’s a sampling of some of the pirate-y things my fellow bloggers wrote about: