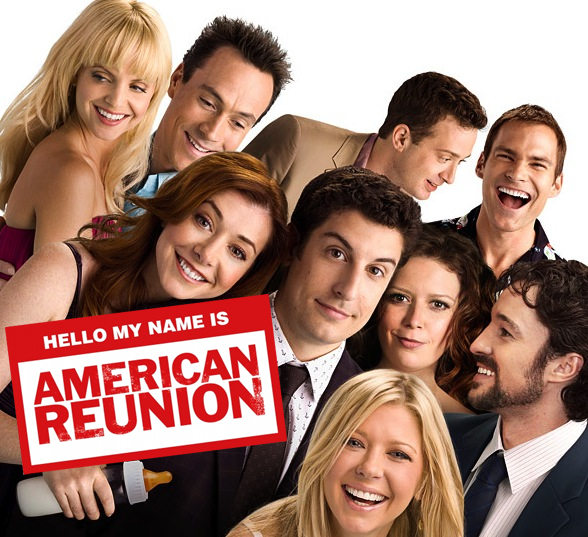 Note: for maximum preservation of lulz, this is a spoiler-free review!

Being a graduate of the Class of ’99 and having grown up along with the American Pie gang, it was inevitable that I’d see American Reunion, the fourth and final film in the Pie franchise that takes place 13 years after the original.

There’s a reason why these films are considered by many to be classics (with the exception of those horrible straight-to-video cheap spin-offs). For those of us squarely in their target demographic, the American Pie films are like milestones by which we can measure our own lives:

So last night it was with great interest and pangs of nostalgia that I went to the theater to see American Reunion.

From the moment I heard the first lines of R. Kelly’s gloriously cheesy sex anthem Bump N’ Grind–the film’s opening song–I knew I was in for some serious laughs. Actually, there were very few moments during the whole film when I–along with everyone else at the theater–wasn’t in hysterics. Like the previous films, American Reunion opens with a spectacularly raunchy gag that made me glad I decided to skip the soda.

American Pie fans will be happy to know that everyone from the entire original cast has reunited for this film–and I mean everyone. Just when you’re thinking “Hey, where’s so-and-so?” that character shows up; usually to great comedic effect.

Thirteen years later, we learn Jim (Jason Biggs) and Michelle (Alyson Hannigan) are still married but now with a toddler and fizzling sex life, Kevin (Thomas Ian Nicholas) is an architect and happily married, Chris/”Oz” (Chris Klein) is a famous sportscaster and TV personality with a huge L.A. mansion and a trophy girlfriend, and Stifler (Seann William Scott) is a temp at a large investment firm. Oh, and Finch (Eddie Kaye Thomas)? He’s essentially “the most interesting man in the world” to have ever graduated East Great Falls High, but that’s all I will tell you without spoiling anything. 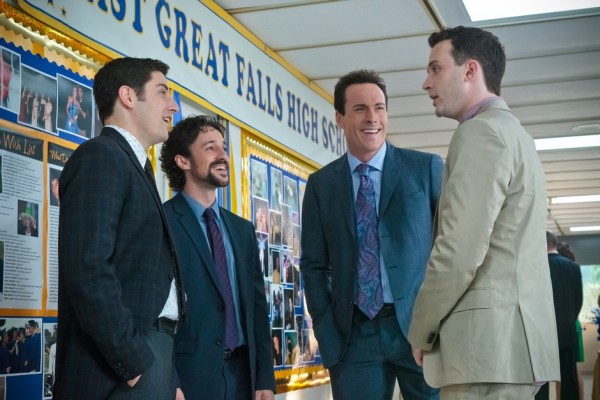 Everything that made you fall in love with these characters in the first place is present and accounted for: Jim’s awkward conversations with his Dad, Finch’s too-cool-for-school attitude, Kevin’s wistful interludes with Vicky, Oz and Heather’s elusive romance, and Stifler’s obligatory obnoxiousness.

Although the premise is a little flimsy (a 13-year high school reunion?), you’ll be laughing so hard it won’t even matter. You know those comedies that blow their wad early by including all the funniest bits in the trailer? I can assure you that’s not the case here. It’s not just a film full of sex jokes or one-liners, either (even though there’s plenty of that too). Some of the gags are pretty elaborate and the payoffs are huge. (Again, so glad I opted not to drink anything.)

But American Reunion is not without a few serious moments too. The film is anchored by the relationship between Jim and Michelle and Stifler’s growing fear and ultimately realization that his best days are behind him. The characters are handled with care and I felt each of their stories was given a satisfying conclusion. Clearly a lot of care and attention to detail went into this movie, and it definitely shows in the cast performances.

Oh! I also wanted to be sure to mention the soundtrack, which I found to be an enjoyable blend of old and new. There’s current big hits (You Make Me Feel, Sexy and I Know It, Everybody Talks…) as well as songs that took me right back to high school (Wannabe, My Own Worst Enemy, Closing Time…). Fans will also recognize a few songs from the previous films that reprise their role as theme music for the characters. It’s also worth mentioning how massive the American Reunion soundtrack is–60 songs! But don’t expect to be able to purchase a complete one yet.

In this disappointing era of American cinema where sequels and remakes are the norm and our childhoods are constantly being plundered, I found myself really surprised by American Reunion. Now please don’t make any more American Pie films so we can end this thing on a high note!