Today’s AESNWBWAST I want to re-introduce you to: The Human League.

Synth pop’s first international superstars, the Human League were among the earliest and most innovative bands to break into the pop mainstream on a wave of synthesizers and electronic rhythms, their marriage of infectious melodies and state-of-the-art technology proving enormously influential on countless acts following in their wake. The group was formed in 1977 by synth players Martyn Ware and Ian Marsh, who’d previously teamed as the duo Dead Daughters; following a brief tenure as the Future, they rechristened themselves The Human League after enlisting vocalist Philip Oakey.

I don’t think it was possible to survive the 80’s without hearing “Don’t You Want Me,” the song that most people associate The Human League with, at least a hundred times. It was EVERYWHERE. And for good reason; it’s a damn catchy song. The band would go on to put out a number of albums throughout the 80s and early 90s, but none of them matching the success of their breakthrough album, 1981’s Dare.

The Human League have gone through many transitions since their early inception and later chart-topping commercial success in the ’80s. These days the band is a trio led by original member Philip Oakey and female vocalists Joanne Catherall and Susan Ann Sulley, who both joined in 1980. But don’t let that discourage you; Philip Oakey is the guy who made The Human League famous, and really, with three original vocalists, The Human League still sounds exactly like what you remember.

In 2001, the band released their eighth studio album Secrets which was well-reviewed by critics and modestly successful on the UK charts. I love its album art: 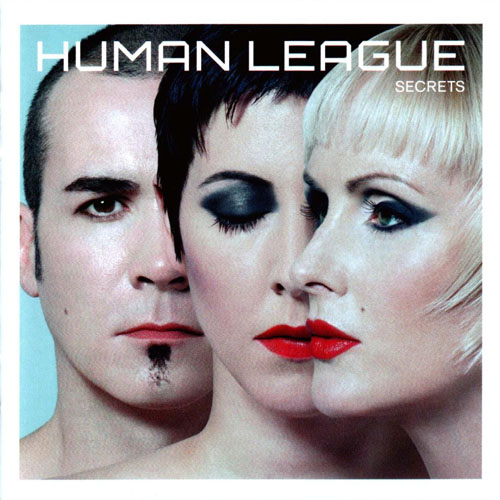 After a ten year semi-retirement/hiatus, the band emerged in 2011 to release their ninth and most recent studio album, Credo. It received mix critical reviews, but I personally I adore it. It sounds like something they could have put out in the early 80’s, especially my favorite track, “Sky.”

Check out this rather cool if creepy video for “Never Let Me Go,” the biggest single from their latest album:

I haven’t seen such adept use of the mirror effect since Prince’s video for When Doves Cry.

AESNWBWAST = “Awesome Eighties Synthpop & New Wave Bands Who Are Still Together” Awareness Week (it’s a shitty name, I know, just deal with it). I officially kicked things off with this post, in which I express my disappointment that most people aren’t aware that there are a lot of awesome synthpop/new wave bands from the ’80s who are still together and putting out albums of music that sound just as good if not better than the ’80s stuff you already know and love. Each day this week I’ll re-introduce you to one of these bands, and tell you why they’re STILL awesome.