Guess I’ve got no more reasons not to buy a 3DS now. [Ace Attorney 5] 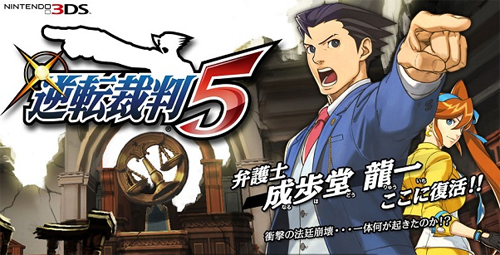 As I explained in an earlier post, I’ve been holding off on buying a 3DS because it’s hard for me to justify spending money on yet another gaming device when my old DS Lite still gets so much use. On top of that, there haven’t been too many 3DS games that I’ve been absolutely dying to play, apart from Kid Icarus: Uprising, Spirit Camera: The Cursed Memoir, and of course the Mario titles. Last year’s price drop wasn’t even enough to win me over.

But yesterday the news broke that Ace Attorney 5, Capcom’s much-anticipated sequel to the Phoenix Wright series of games, was confirmed for a U.S. release. Well now, that just changes everything!

I’ve said it many times before on this blog, if there is one thing that will compel me to spend money on a new gaming system, it is platform-exclusive titles, especially if they happen to be part of one of my favorite series (rare exception: Uncharted: Golden Abyss for Playstation Vita, which at this point I doubt I’m ever going to purchase).

The Phoenix Wright games, along with the Professor Layton series, have been the biggest draws for me on the DS platform. I’ve played every single (American) game in each series, and I’m still anxiously awaiting any news on that Phoenix Wright/Professor Layton crossover game; namely, whether or not it will be localized. Ace Attorney 5 coming to the west is a great sign.