With the 85th Annual Academy Awards having come and gone, this week’s League topic was an Oscar-worthy one. But the thing is, I don’t really care about the Academy Awards like I once used to. I can’t stand the pretentiousness, the media hype, the scripted jokes. Not even Seth MacFarlane hosting this year was enough to get me excited about them, so I was more than happy to spend the evening catching up on video games and casually monitoring my Twitter feed as friends reacted to the winners and Ann Hathaway’s nipples.

Anyway, for this post I thought it would be fun to look back on The Oscars of a time when they mattered more to me: the 1980s. More specifically, I was curious about past Oscar winners for Best Original Song. (Another post about 80’s music? Gee that never happens around here.) What were the big 80s movies that spawned the most memorable songs of the decade? And looking back on them, do I agree with the winners? It was a fun exercise and trip down movie memory lane. I mostly came to the realization that the 1980s Academy had a hard-on for what we consider today as “soft rock” or “easy listening”–you know, the kind of music you’d hear at your dentist’s office.

I rounded up all the winners for each year and posted them below for, um, easy listening. I also shared a couple of my random thoughts on each song, and whether or not I think it should have won for Best Original Song. 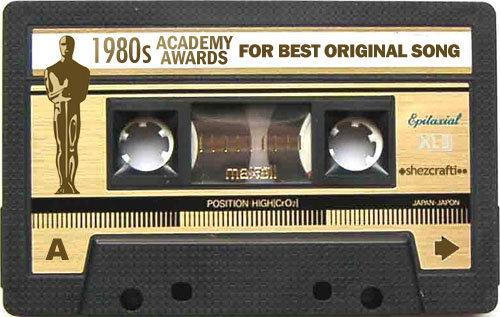 As much as I love 80’s movies about dancing AND musicals, I’m actually not a big fan of Fame–hard to believe, I know. But I do love the title song by Irene Cara, which clings to that dying era of disco for all its worth. In 1980, Fame won Oscars for Best Score and Best Song (in fact, two Fame songs were up for the award: “Fame” and “Out Here On My Own”, both by Irene Cara), but lost for Best Original Screenplay, Best Adapted Screenplay, and Best Sound. That sounds about right. This is one of those movies I think is more memorable for the music. (For what it’s worth, my 80’s musical movie about musicals of choice is A Chorus Line.)

My mom had a huge obsession with Dudley Moore back in the 80s, which means I’ve seen almost every Dudley Moore movie there is to see, including Arthur, multiple times. I’m not sure I would have picked Christopher Cross’ “Arthur’s Theme” over, say, “Endless Love” by Lionel Richie, but Christopher “I’m so sensitive because I’m kind of ugly” Cross seems to have had a lock on on those smooth, early 80s love ballads that made women like my mom drop their panties at the first slow, drawn-out string note.

Film: An Officer and a Gentleman (1982)
Performed by: Joe Cocker & Jennifer Warnes

How to win an Oscar for Best Original Song in the 80’s: perform your song in a duet with Jennifer Warnes. This song won an Oscar, along with her other famous duet, “(I’ve Had) The Time of My Life” from Dirty Dancing, which we’ll get to in a minute. This is another song that makes me think of my mom, who was really into those cheesy 80s love songs. In fact, at one point she owned a whole set of pastel-colored cassette tapes she bought from Time-Life Music called “Secret Love” that was full of songs just like this. She’s also the reason I’ve seen this movie more times than I care to admit. It’s not so bad, I guess; I like Deborah Winger. But if I were in charge of the Oscars that year, you know I would have chosen “Eye of the Tiger” by Survivor, which lost out to this gag-fest of a ballad.

YESSSSSSSSSSSS. This song, you guys. Not only do I love Flashdance, I LOVE THIS GODDAMN SONG. Like, you have no idea. It’s #1 on my list of cheesy motivational songs of the 1980s and every now and then, if you get enough drinks in me, I’ll belt it out at karaoke. I definitely agree it should have won that year, considering it was up against yet another song from Flashdance (“Maniac” by Michael Sembello), some crap I’ve never heard of, and fucking Yentl. A+, Academy.

Film: The Woman in Red (1984)
Performed by: Stevie Wonder

Wow, this was a tough year for Best Original Song. Look at the other contenders here:

I know you fanboys would have wanted me to declare Ghostbusters my fantasy winner, but I would have gone Phil Collins on this one. I’m sorry, but that song–along with most Phill Collins songs–is just fucking fantastic. To steal a joke from my buddy Scott: My friends thought I’d never get over my Phil Collins obsession, but take a look at me now.

I love ya, Lionel, but NO to this song. Not when I know “The Power of Love” from Back to the Future could have won. I don’t care how luscious your mustache is–I’d rather ride Huey Lewis’s train even if I have to pay with a credit card. 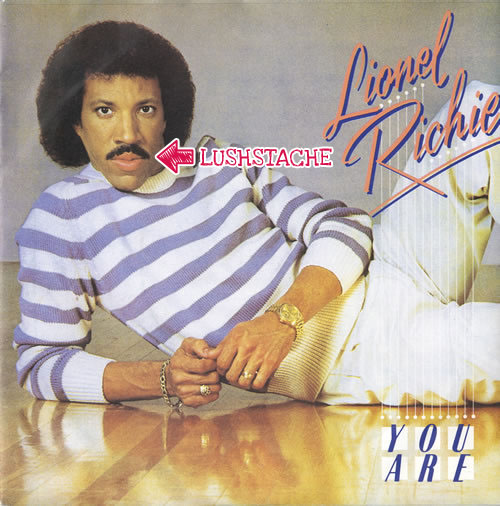 Who doesn’t love Top Gun? I’ll try to understand if you don’t, but just know you’re not anybody I could ever be BFFs with. I’m not a huge fan of this song, which I always found kind of depressing, but I can understand the Academy wanting to give an award to Top Gun for something. However, this was another one of those years where some really tough decisions had to be made. “Take My Breath Away” was up against “Somewhere Out There” from An American Tail and Peter Cetera’s “Glory of Love” from The Karate Kid Part II. I would have fought for Glory of Love’s honor, all the way. It’s one of my favorite songs of all time. In fact, I’m listening to it on Spotify and singing it like a damn fool as loud as I possibly can RIGHT NOW. My cat is more than a little freaked out.

NOBODY PUTS BILL MEDLEY & JENNIFER WARNES IN A CORNER! Again, another duet with Jennifer Warnes, another Oscar. You know, I don’t even know what the hell Jennifer Warnes does outside of singing shitty duets that win Oscars. I suppose I could look her up and what she’s all about, but I just can’t muster the enthusiasm. While I do love me some Dirty Dancing and “The Swaze,” I actually loathe this particular song on a deep, deep level. However, I used to love this song when the movie first came out, but so did the rest of America, which means it was EVERYWHERE. Back in 1988, my elementary school even put on a talent show where no less than ten acts all used songs from Dirty Dancing, and guess which one was the most popular? It haunted my life, it haunted my dreams, and nowadays it haunts my television every time I see one of those fucking Sandals commercials.

Do I think it should have won for Best Song that year? Eh, sure, why not. I try to remember that I too once loved this song, but if I could go back in time, I’d definitely pick Starship’s “Nothing’s Gonna Stop Us Now” from the movie Mannequin instead. That’s right up there with Peter Cetera’s “Glory of Love” in my book.

Here’s something you probably don’t know about me because I don’t think I’ve ever mentioned it on this blog, but Working Girl is one of my favorite movies of the 80s. I love Melanie Griffith, who I just find adorable (pre-plastic surgery, obviously), and of course Harrison Ford and the always great Sigourney Weaver. And Joan Cusack! And Alec Baldwin! And a coked-up Kevin Spacey! And the fact that this movie takes place in New York City in the 80s. I love films that take place in 80s-era NYC. It’s just a great movie all around, and I love the big “fuck you” moment Tess gets to have at the end.

Anyway, it was slim pickins for Oscar music this year, with only two other contenders, both from movies I’ve never seen. I have no problems with Carly Simon’s inspirational “Let the River Run” winning for Best Original Song. When you hear it in the movie accompanying those breathtaking shots of the Twin Towers, it’s almost enough to make me cry.

Ah, the start of Disney’s comeback era! This year there were two songs from The Little Mermaid up for Best Song–this one, along with “Kiss the Girl.” Personally I would have picked “Kiss the Girl,” but both songs are pretty good. I’m certainly glad Randy Newman didn’t win.

Anyway, I hope you enjoyed this look back at Oscar-worthy music from the 80s as much as I enjoyed pretending to have better taste than The Academy!

Wondering what this is all about? This week’s assignment from The League of Extraordinary Bloggers was simply, “The Oscars.” Here’s how my fellow Leaguers interpreted the topic: